I am the father of four daughters (current ages 12, 12, 13, 15) and my wife is Russian. We currently live in Kazakhstan and have lived here for the past 6 years. We all speak English and Russian. These things are all important for the post below. 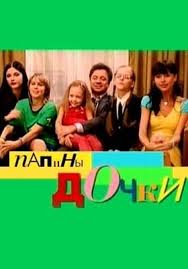 My wife and I started watching a Russian sitcom - Papini Dochki1 - when we spent two months living in Krasnoyarsk with my Mother-in-Law during the summer of 2009. We had four very young girls who went to bed at 8:00 each evening. We found this show, which follows the life of a man and his five daughters, and started watching it every night. During that summer we watched about 100 episodes or so. The next time we spent significant time in Russia (2012), we watched it when it came on television, but didn’t follow it quite as closely.

Now that our daughters are all kind of the right age to appreciate the show, we started watching it together (it’s free on youtube!) about 2 months ago. It’s a fun show and our girls have really gotten into it.

But, what does this have to do with casual academic corruption? Quite a bit actually. Papini Dochki is one of the most successful Russian original programs. Since the show mainly follows the five daughters, all of whom were school-aged when the show began airing, it spends a lot of time showing the girls in school. While the show is a lot of fun, the last few weeks I’ve begun noting just how pervasively it portrays the culture of academic corruption. This is an issue that is important to me since I live in a country that is still immersed in a post-Soviet culture - and whose education system and culture is closely tied with the Russian one. Our university has very different standards of admission and expectations for students when they study here. However, it is clear to see where so many of the bad habits and ideas that our students begin with come from. I just want to illustrate a few instances of this casual acadmic corruption here.

One of the main storylines is about the middle daughter - Galina Sergeyevna - who goes by her full name and patronymic like an older person because she is serious and has a genius-level intellect. The entire class (she is several grades ahead of her age) cheats off her. Her boyfriend, Ilya Polizhaikin, is barely surviving school until she sits next to him and allows him to copy from her. In fact, she actively works to share her answers with her sister, Polizhaikin, and others in the class. The teachers turn their heads at this - and at times actively encourage this behavior. 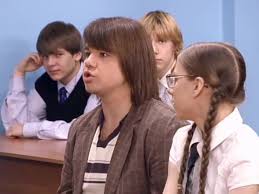 The teachers and administrators at the school are seen to trade favors for grades. The athlete in the family, Yevgeniya, is often called on to bring honor to the school in athletic competitions, and in return is given grades. The process of hiring “tutors” from different university acceptance committees to help prepare students for entrance was a theme when the oldest daughter - fashion-obssessed Masha - graduated from high school and was preparing to go to college. She had Galina Sergeyevna cheat for her and take the entrance exam. She was accepted into one of the most prestigious physics institututes. When the leadership of the institute learned that it wasn’t Masha who passed the test, they kept her anyway so that they could have a pretty face at the university for once. Masha is succeeding by cheating on all of her exams with the explicit help of one of her classmates.

These are just a few of the examples from the past few days of watching that came to my mind. The way that these practices are shown, normalized, and laughed at reflects how deeply these practices and attitudes are embedded in the learning culture and in the broader culture. Some of the themes I have identified are the following:

These general themes are not limited to schools in the post-Soviet states. I feel that much of the lament about higher education in the US is about the attitude of the students about actual learning as opposed to playing the game and getting the prize. Seeing the casual attitude about these issues being celebrated in the 2000s is a disservice to students. The four general attitudes that I outlined above run counter to everything I believe in as a teacher.

In my classes I am always working on assignments for students that rely on them going through the process in order to learn. I don’t rely on big last minute tests to gauge student knowledge, because that seems to activate in the students the tendencies that I’ve identified. I am sure that I am more sensitive to these portrayals of academic misconduct now than the first time that we watched the show. Watching the show now with this different understanding is really making me think about teaching more, which is always a good thing.

I would also like to note that my daughters also all attended local Russian language schools here in Kazakhstan for our first two years here. Many of these practices were still pervasive in school. Our oldest daughter’s teacher sent all the answers to the state math exam to the students so that they could “study” for it. The attitudes about “spargalki” or cheat sheets has also not changed much.